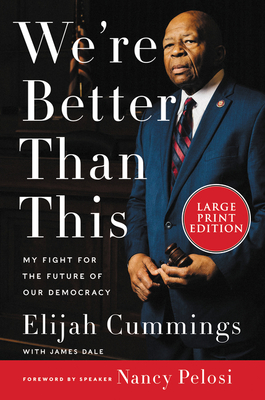 With a foreword by Speaker Nancy Pelosi.

“There was no greater friend to the poor, to the lost, to the left out, and to

the left behind. If you want to understand this great man, read his historic,

crying in the wilderness’ on behalf of our American democracy.”

Known for his poise, intellect, and influence until his death in October 2019, Elijah Cummings was one of the most respected figures in contemporary politics, a politician who held fast to his beliefs but was not afraid to reach across the aisle in the name of friendship and progress. Since his earliest days in government through his time as a representative and chairman of the House Oversight and Reform Committee, he proved his abilities as a politician who could operate at the highest levels of democracy, serving the people of Baltimore and illustrating the importance of working with—and for—the underdog.

Yet in his final years of life, Cummings recognized that democracy was the underdog. We’re Better Than This draws from Cummings’s own life to show the formative moments that prepared him for the disturbing first years of the Trump presidency and spurred him to hold the administration accountable for their actions. Weaving together the urgent drama of modern-day politics and character-defining stories from his past, Cummings offers a never-before-told perspective on how his personal history, coming of age in South Baltimore, laid the foundation of a life spent fighting for justice. He goes behind the scenes with the House Democratic leadership, offering an eye-opening chronicle of the grim realities of holding the Trump administration to account. Detailing this moment of unprecedented obstructionism by both the president and Republicans, Cummings presents a vital defense of how government oversight defines our collective trust, examining the dangerous precedent for both parties that exists if the executive branch remains above public scrutiny.

Part memoir, part call to action, We’re Better Than This is the story of our modern-day democracy and the threats that we all must face together, as well as a retrospective on the life and career of one of our country’s most inspirational politicians. As we approach another test of our democracy, the next race for the White House, We’re Better Than This reminds people that in this country we don’t elect kings, and we cannot afford four more years of this false one.

Congressman Elijah E. Cummings was born and raised in Baltimore, Maryland and died there on October 17, 2019.  He earned his bachelor’s degree in Political Science from Howard University, serving as Student Government President and graduating Phi Beta Kappa, and then graduated from the University of Maryland School of Law. Congressman Cummings dedicated his life of service to uplifting and empowering the people he represented. He began his career of public service in the Maryland House of Delegates, where he served sixteen years and became the first African American in Maryland history to be named Speaker Pro Tem. First sworn in as a member of the U.S. House of Representatives in 1996, Congressman Cummings proudly represented Maryland's 7th District since 1996. He became Ranking Member of the House Committee on Oversight and Reform in 2011 and was appointed as Chairman of the Committee in 2019.

James Dale has collaborated on a number of books on sports, business, medicine, and life lessons. His works include The Power of Nice with agent-negotiator Ron Shapiro; Just Show Up with Hall of Fame baseball player Cal Ripken Jr.; and The Q Factor with Super Bowl–winning coach Brian Billick.

“In Congress, we miss his wisdom, his warm friendship, and his great humanity. In Baltimore, we miss our champion. God truly blessed the United States with the life and leadership of Elijah Cummings. What a blessing that, with this wonderful book, generations of Americans—our ‘living messengers’ to the future—will now be able to read his words and learn from his beautiful life!”
— From the Foreword by Speaker Nancy Pelosi

"Impressive on multiple levels . . . an urgent call to action, imploring us to defend our democracy as it is assailed by threats internal and external. And, perhaps above all, it is a poignant reminder of just how much the nation lost with his death. . . . To read this book is to join the ranks of his admirers."
— NPR

"Moving insight into a remarkable man, which remains a touching tribute to his accomplishments in the later years of his life."
— Library Journal (starred review)

"A forceful valedictory. . . . Cummings’s paeans to family, faith, and general idealism make this a moving tale worth reading."
— Publishers Weekly

"The legendary, late Baltimore congressman shares the stories of his past with an eye to the future in this apt-for-our-times memoir."
— Newsweek

“Excellent political memoir by the late Democratic representative from Baltimore…A thoughtful and inspiring exhortation to do better by a much-missed leader.”
— Kirkus Reviews (starred review)

“I absolutely love the late Rep. Elijah Cummings’ book ‘We’re Better Than This: My Fight for the Future of our Democracy.’ It was his last call to action before he passed away.”
— Suzanne Malveaux, CNN National correspondent

“This memoir serves as an urgent call to action for all Americans as we strive to live up to our nation’s pledge of ‘liberty and justice for all’ as only Elijah could deliver it. He and I often spoke of our shared backgrounds and experiences, probably the most significant of all was that we each grew up as the son of a preacher…He is missed, but his message lives on in this powerful testimony of how we can best move our country toward the promise of ‘a more perfect union.’”
— Rep. James E. Clyburn, House Majority Whip (D-SC)