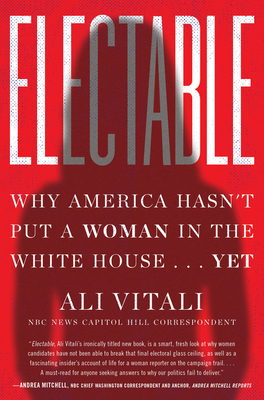 A fearless deep dive into the 2020 election from former MSNBC “Road Warrior” and now NBC Capitol Hill correspondent Ali Vitali, who covered the campaign trail every step of the way—investigating the gendered double standards placed on women presidential candidates of that cycle and those who came before, and what it will take for a woman to finally break the glass ceiling and win the White House.

Opening with the moment when Joe Biden and Kamala Harris were finally declared the winners of the 2020 race—the long, drawn-out journey towards who would next inhabit the White House, and the resulting and disputed defeat of Donald Trump, Electable is a sweeping look at a lingering question from that Presidential race. Why, when we saw more women run for President of the United States than ever before in our history, did we still not cross that final hurdle?

Following the 2020 race minute by minute as the reporter embedded with Elizabeth Warren, Ali Vitali witnessed up-close the way that our most recent election was unique—not simply for the way in which the incumbent conducted himself, but for the ways in which the field, rich with Democrats from all kinds of backgrounds, was both modern but also more of the same. With more female candidates than ever before, this was a history-making race, and yet these women—most of them incredibly qualified with decades of public service on their resumes—dealt once again with a different level of scrutiny than their male counterparts. Woven throughout is close examination of the treatment of Hillary Clinton, Geraldine Ferraro, Shirley Chisholm, and those on the right as well. Grappling with ideas around the “likeability” and “electability” issues, as well as fundraising hurdles many female candidates face, Vitali asks the same questions she and so many have been grappling with for decades, but especially since Hillary Clinton’s devastating defeat in 2016: Why is it so hard for a woman to be taken seriously as a presidential contender? What will it take for men and women to be held to the same standard? What happens next?

Gabbard, Harris, Williamson, Gillibrand, Warren, Klobuchar…and then there were none.

ALI VITALI is a Capitol Hill Correspondent for NBC News. She covered the 2016 and 2020 presidential contests from primary to inauguration—on the ground and with the candidates—as well as the 2018 and 2022 midterms, from across the country and in the nation's capital.

"Electable should be required reading for, well, pretty much everyone." — Daily Beast

“In this hopeful and well-documented study, Vitali clearly shows the importance of a truly level playing field. ‘It’s the job of the candidates to run,’ she writes, ‘but it’s on us to ensure the track is uniformly flat for all of them’ ... Intelligent and engaging political analysis.” — Kirkus Reviews

“An insightful and well-informed look at the progress women in politics have made, and where they still need to go." — Publisher’s Weekly

“Electable, Ali Vitali's ironically titled new book, is a smart, fresh look at why women candidates have not been able to break that final electoral glass ceiling, as well as a fascinating insider's account of life for a woman reporter on the campaign trail. Vitali's sharply wrought portraits of the key players in the 2020 campaign and thoughtful analysis of the pitfalls of gender politics make this a must read for anyone seeking answers to why our politics fail to deliver.”
— Andrea Mitchell, NBC Chief Washington Correspondent, Anchor Andrea Mitchell Reports

“Is America ready for a woman to be president? A resounding ‘yes’ according to polls and yet it still hasn’t happened. What gives? Ali Vitali confronts the possibilities we may not want to consider and explains in this sharp and often poignant book what it’s going to take to break the single dumbest losing streak in politics.”
— Katy Tur, MSNBC Anchor and New York Times bestselling author of Unbelievable