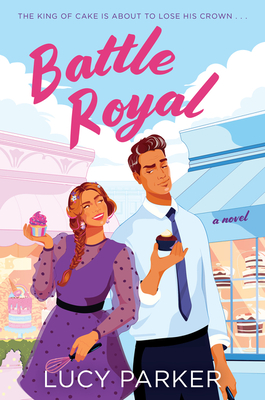 Beloved author Lucy Parker pens a delicious new romantic comedy that is a battle of whisks and wits.

Four years ago, Sylvie Fairchild charmed the world as a contestant on the hit baking show, Operation Cake. Her ingenious, creations captivated viewers and intrigued all but one of the judges, Dominic De Vere. When Sylvie's unicorn cake went spectacularly sideways, Dominic was quick to vote her off the show. Since then, Sylvie has used her fame to fulfill her dream of opening a bakery. The toast of Instagram, Sugar Fair has captured the attention of the Operation Cake producers…and a princess.

Dominic is His Majesty the King’s favorite baker and a veritable British institution. He’s brilliant, talented, hard-working. And an icy, starchy grouch. Learning that Sylvie will be joining him on the Operation Cake judging panel is enough to make the famously dour baker even more grim. Her fantastical baking is only slightly more troublesome than the fact that he can’t stop thinking about her pink-streaked hair and irrepressible dimple.

When Dominic and Sylvie learn they will be fighting for the once in a lifetime opportunity to bake a cake for the upcoming wedding of Princess Rose, the flour begins to fly as they fight to come out on top.

In this royal battle, can there be room for two?

Lucy Parker is an award-winning romance author who lives in New Zealand. A romance reader from a young age, she loves to write about people pursuing their dreams and falling hopelessly in love along the way—often with the last person they would expect! Her previous titles have been featured in Entertainment Weekly, Cosmopolitan, and Oprah Magazine, and were included in NPR’s Book Concierge for three consecutive years.

"Delightful, funny, romantic, and surprisingly emotional, Battle Royal is Lucy Parker at her best. A wonderful must read romance that I could not put down."  — Kristen Callihan, New York Times bestselling author

"Lucy Parker’s books are marvels of wit and warmth and empathy, and Battle Royal is no exception. It’s as delicious as the cakes baked by Sylvie and Dominic, from first page to last. I swooned, laughed, wept, and loved the story wholeheartedly, and I can’t wait to reread it ASAP." — Olivia Dade, national bestselling author of Spoiler Alert

“As magical as it’s heroine’s confectionary creations, Battle Royal is absolutely enchanting. Lucy Parker is the Michelangelo of grumpy + sunshine. I gobbled this book up!” — Rosie Danan, author of The Intimacy Experiment

“Only an author as deft and gifted as Parker could seamlessly mix these things into one tale and have them come out as perfectly calibrated, delectably sweet, and emotionally layered as a masterful wedding cake." — Entertainment Weekly

"There are so many things to love about this book! Its wit and warmth; the deft way Parker weaves in a Great British Bake Off-like competition; the scintillating royal secrets. But my favorite by far was watching the icy hero melt into a puddle at his sunshine heroine's feet. Battle Royal is the perfect reading-slump buster, and once again proves why Lucy Parker is the Queen of the Grump." — Therese Beharrie, author of One Last Chance

"Lucy Parker's Battle Royal won my heart with its effortless effervescence and deep notes of aching poignancy. I adored this tale of rival bakers who forge an unexpected connection while vying for a royal commission."
— Ruby Lang, author of Playing House

"Battle Royal is Lucy Parker at her best! This book is the coziness of your favorite baking competition show with the snipe and spark of a great enemies to lovers romance. Try and have a snack handy while you're reading this one ... you will get hungry from all the delicious descriptions while Dominic and Sylvie bake, banter, and fall in love." — Jen DeLuca, author of Well Played

"Parker is a writer who knows her audience, and she keeps raising the bar when it comes to warm romances and charming tropes. Opposites attracting over delicious cakes and the fearsome thrill of competition are a heady combination as Sylvie and Dominic's chemistry snaps, crackles, and pops off every page. The slow burn of the romance is tantalizing and well paced, though there is plenty of setting and detail to take in while readers await the inevitable happily-ever-after. An utterly delicious romance that's meant to be devoured." — Kirkus Reviews (starred review)

"With a perfect trifecta of endearing characters, superb use of the enemies-to-lovers trope, and a chemistry-laden slow burn, this excellent start to Parker’s newest series is one readers will rush to dive into." — Library Journal (starred review)

"Parker’s winsomely witty and whimsically inventive contemporary romance is truly scrumptious. From the zippy dialogue and humorous banter exchanged between the book’s perfectly matched protagonists to the delectable descriptions of sweet treats that would not be out of place in Willy Wonka’s factory, this deliciously sexy love story whips up everything romance readers crave." — Booklist (starred review)

"Brimming with pop culture references and quick wit… irresistible banter and even more irresistible chemistry… The result has all the fun of a fluffy rom-com, with the emotional catharsis of a more dramatic romance.”  — Publishers Weekly