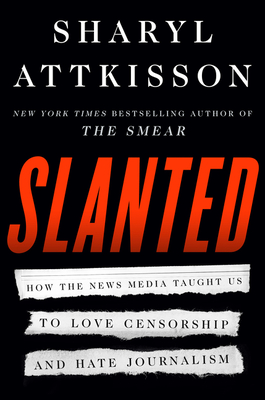 When the facts don’t fit their Narrative, the media abandons the facts, not the Narrative. Virtually every piece of information you get through the media has been massaged, shaped, curated, and manipulated before it reaches you. Some of it is censored entirely. The news can no longer be counted on to reflect all the facts. Instead of telling us what happened yesterday, they tell us what’s new in the prepackaged soap opera they’ve been calling the news.

For the past four years, five-time Emmy Award–winning investigative journalist and New York Times bestselling author Sharyl Attkisson has been collecting and dissecting alarming incidents tracing the shocking devolution of what used to be the most respected news organizations on the planet. For the first time, top news executives and reporters representing every major national television news outlet—from ABC, CBS, NBC, and CNN to FOX and MSNBC—speak frankly, confiding in Attkisson about the death of the news as they once knew it. Their concern transcends partisan divides.

Most frightening of all, a broad campaign in the media has convinced many Americans not only to accept but to demand censorship over journalism. It is a stroke of genius on the part of those seeking to influence public opinion: undermine public confidence in the news, then insist upon “curating” information and divining the “truth.” The thinking is done for you. They’ll decide which pesky facts shouldn’t cross your desk by declaring them false, irrelevant, debunked, unsafe, or out-of-bounds.

We have reached a state of utter absurdity, where journalism schools teach students that their own, personal truth or chosen narratives matter more than reality. In Slanted, Attkisson digs into the language of propagandists, the persistence of false media narratives, the driving forces behind today's dangerous blend of facts and opinion, the abandonment of journalism ethics, and the new, Orwellian definition of what it means to report the news.

Sharyl Attkisson has been a working journalist for more than thirty-five years and is host and managing editor of the nonpartisan Sunday morning TV program "Full Measure with Sharyl Attkisson." She has covered controversies under the administrations of Bill Clinton, George W. Bush, Barack Obama, and Donald Trump, emerging with a reputation, as the Washington Post put it, as a “persistent voice of news-media skepticism about the government’s story.” She is the recipient of five Emmy Awards and an Edward R. Murrow Award for investigative reporting. She has worked at CBS News, PBS, and CNN and is a fifth degree blackbelt master in Taekwondo.

“From ‘mostly-peaceful protests’ to ignoring the lies that led to the Mueller investigation, the media increasingly gives us only the facts they want us to hear, packaged into the stories they need us to believe. Nobody explains this new dynamic better than Sharyl Attkisson. Throughout Slanted she exposes, based on speaking first hand with people at places she used to work, what is really happening at the biggest names in media. Prepared to be shocked and dismayed.  It truly is worse than you think." — Jason Chaffetz

“Sharyl Attkisson left CBS News in search of a place that would not keep suppressing her work. She speaks from experience about the bias that dominates much of the news media today, and she writes about it with clarity and authority. Her latest book is a most interesting read.” — Brit Hume

"Sharyl has an uncanny knack to see the kernel of truth in the most convoluted story. In Slanted, she applies those skills to one of the biggest stories of our time: manipulation of information in the media. Democracies depend on an informed public. However, the public cannot learn about without fearless and honest reporting. Slanted is just that." — Marcel Reid, Whistleblower Summit and Film Festival

"Sharyl Attkisson is a force - and one of the bravest people I know. Those working to destroy journalism wield staggering power and the number of us willing to take them on are few. But she is one of them and she does it with meticulous investigative journalism, systematically breaking down the lies and exposing the ‘liars.'" — Lara Logan

"For decades now, Sharyl Attkisson has deftly navigated the world of establishment journalism, refusing to kowtow to ephemeral trends or prevailing biases, cutting through the noise from the bipartisan propaganda machine inside the D.C. beltway. Her latest efforts in Slanted remind us that while censorship and disinformation campaigns are nothing new in our history, the realm of social media and so-called fact-checkers has added another layer to the deception."  — Mickey Huff; director of Project Censored and president of the Media Freedom Foundation; Chair of Journalism, Diablo Valley College