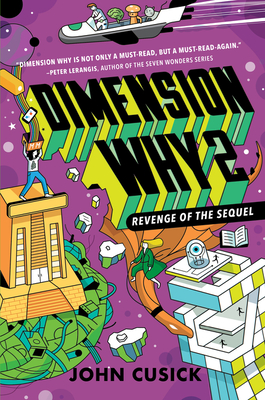 This is book number 2 in the Dimension Why series.

John Cusick returns with the second hilarious installment of his middle grade duology about a 31st-century boy and a 21st-century girl who team up to save the universe.

Phineas T. Fogg and Lola Ray may have just saved the universe without really trying, but it’s going to take a lot of work to get Lola back home to the twenty-first century. Their only hope is to find Dimension Why. Good thing Lola’s father left her a map embossed on a Twinkie.

But before Phin and Lola can begin their search, a mysterious girl, wearing a bathrobe and riding a dragon, absconds with the special snack cake! And, oh right, the mystery girl wants to destroy the universe!

Now the two besties must travel the galaxy, escape the clutches of the Golden Cathedral, and face down the all-powerful evil AI of a floundering interstellar publishing company. As they begin to uncover the truth about their mysterious foe, Phineas and Lola realize that there’s more to this Twinkie-stealing, dragon-riding girl than meets the eye.

Pop open a Maybe Meal, heat up some baked beans, and get ready to save the universe one last time, we promise . . . with the second book in this hilarious adventure series by acclaimed author John Cusick.

John Cusick is an author and literary agent. He lives in Brooklyn with his wife and a large orange cat named Donut. Records indicate he was born in Worcester, Massachusetts. There is no hard evidence to suggest Mr. Cusick is from outer space, and frankly we don’t know how these rumors get started.

"Budding sci-fi fans and humor aficionados are bound to team up for this hysterical intergalactic adventure." — Bulletin of the Center for Children’s Books