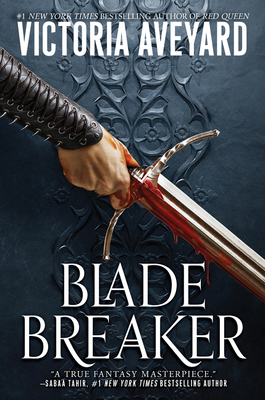 This is book number 2 in the Realm Breaker series.

Since Victoria Aveyard launched the instant #1 New York Times bestselling Realm Breaker, the series has taken readers by storm. Now the sequel is here to continue this epic fantasy series.

The fate of the world rests on a blade’s edge.

With her Companions at her side, Corayne has mastered the ancient magic in her blood, closing one spindle and pushing back the evil that threatens their world. But the fight is far from over.

Queen Erida and her consort, Taristan, continue their march through Allward, crumbling castles and conquering kingdoms with an unstoppable army and unthinkable forces of darkness.

With no choice but to raise an army of their own, Corayne and her Companions face perilous lands, dangerous mercenaries, and seething monsters, as they rally a divided world behind them. But will they be strong enough to confront the latest evil that Queen Erida and Taristan have unlocked? Or will it consume their world in flames, dashing all hope for victory completely.

From the New York Times bestselling author of the Red Queen series, comes another sweeping and epic fantasy adventure featuring multiple-POVs, incredible action, and unforgettable twists, perfect for fans of Leigh Bardugo and Tolkien himself.

"A fantasy fan's dream." —Roseanne A. Brown, New York Times bestselling author of A Song of Wraiths and Ruin

Victoria Aveyard was born and raised in East Longmeadow, Massachusetts, a small town known only for the worst traffic rotary in the continental United States. She moved to Los Angeles to earn a BFA in screenwriting at the University of Southern California. She currently splits her time between the East and West coasts. As an author and screenwriter, she uses her career as an excuse to read too many books and watch too many movies. She is the author of the New York Times bestselling Red Queen series, and you can visit her online at www.victoriaaveyard.com.

“[Blade Breaker] builds to a nail-biting reckoning of a climax… Will leave readers gasping for more.” — Kirkus Reviews

“The mix of politicking and real physical fighting makes this sequel gripping, while the relationships between the odd band of Companions and their enemies have depth… fans of Realm Breaker (2021) will clamor for it.” — Booklist

“Aveyard has nailed the balance of political maneuvering and action sequences, avoiding the middle book slump…Aveyard’s fans will be awaiting this sequel.” — School Library Journal

Praise for Realm Breaker:
"The entire time I was reading REALM BREAKER, I wanted one thing: for the book to never end. It is classic yet groundbreaking, romantic yet edgy, a rollicking adventure that carries you along at a relentless pace. A true fantasy masterpiece."  — Sabaa Tahir, #1 New York Times bestselling author of the An Ember in the Ashes series.

"Set in a sprawling world of warring empires and hair-raising magic that any reader would want to get lost in, REALM BREAKER is a fantasy fan's dream, injected with Aveyard's trademark action, heart, and razor-sharp characters." — Roseanne A. Brown, New York Times Bestselling Author of A Song of Wraiths and Ruin

"Realm Breaker is the kind of book you take with you to your favorite reading chair. The world is rich and built with deep care; the characters are complex and flawed; the story is filled with the kind of sweeping scale that fantasy does best. This is a new classic."  — Marie Lu, #1 New York Times bestselling author of Skyhunter

"An enthralling adventure, a richly imagined world, and the most impossible odds combine to make Realm Breaker an addictive, tightly-paced gem of a book. Readers will delight in Aveyard’s bewitching new beginning, all at once epic in scope and intimate in detail. It’s the adventure I was desperate to go on as a teenager and the kind of story I eagerly devour as an adult." — Emma Theriault, author of Rebel Rose

“There are a wide variety of action scenes, daring escapes, and betrayals…exquisite descriptions and clashing motivations result in a nuanced, sprawling realm. An epic series opener of old-school high fantasy catering to modern audiences.“ — Kirkus Reviews