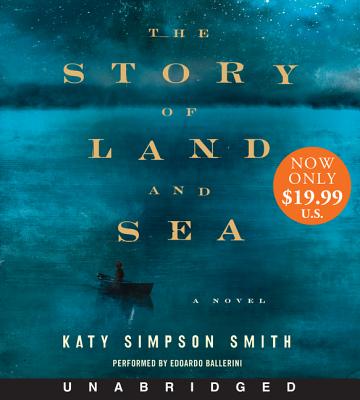 By Katy Simpson Smith, Edoardo Ballerini (Read by)
Email or call us for information about purchasing this item.
Special Order; please call or email to confirm availability

“Simpson's debut novel is a quiet and radiant book. This story of love and loss is set during the later part of the American Revolutionary War and is told from the shifting viewpoints of a 10-year-old white girl, Tabitha; her family; their slave, Moll; and Moll's young son, Davy. While we can never know exactly what it felt like to be living on the North Carolina coast, on land and sea, at the end of the 18th century, Smith's graceful writing seems to capture the very essence of a different way of being in the world. This is an exceptionally written novel with characters whose hard lives are redeemed by moments of both beauty and mercy.”
— Sarah Goddin, Quail Ridge Books, Raleigh, NC

Set in a small coastal town in North Carolina during the waning years of the American Revolution, this incandescent debut novel follows three generations of family—fathers and daughters, mother and son, master and slave, characters who yearn for redemption amidst a heady brew of war, kidnapping, slavery, and love.

Drawn to the ocean, ten-year-old Tabitha wanders the marshes of her small coastal village and listens to her father’s stories about his pirate voyages and the mother she never knew. Since the loss of his wife Helen, John has remained land-bound for their daughter, but when Tab contracts yellow fever, he turns to the sea once more. Desperate to save his daughter, he takes her aboard a sloop bound for Bermuda, hoping the salt air will heal her.

Years before, Helen herself was raised by a widowed father. Asa, the devout owner of a small plantation, gives his daughter a young slave named Moll for her tenth birthday. Left largely on their own, Helen and Moll develop a close but uneasy companionship. Helen gradually takes over the running of the plantation as the girls grow up, but when she meets John, the pirate turned Continental soldier, she flouts convention and her father’s wishes by falling in love. Moll, meanwhile, is forced into marriage with a stranger. Her only solace is her son, Davy, whom she will protect with a passion that defies the bounds of slavery.

In this elegant, evocative, and haunting debut, Katy Simpson Smith captures the singular love between parent and child, the devastation of love lost, and the lonely paths we travel in the name of renewal.

Katy Simpson Smith is the author of a study of early American motherhood, We Have Raised All of You: Motherhood in the South, 1750-1835, and a novel, The Story of Land and Sea. She lives in New Orleans.

Edoardo ballerini was nominated for a 2012 Audie Award for his recording of The Land of Laughs. He has also received four Earphones Awards from AudioFile Magazine. On screen, Edoardo is best known for his work in the television series The Sopranos, Boardwalk Empire, and 24, as well as the films Dinner Rush and Romeo Must Die.