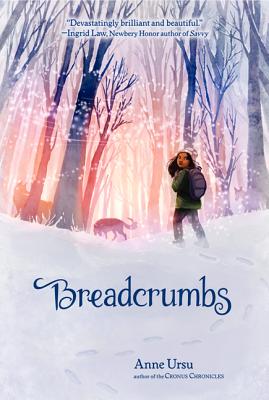 By Anne Ursu, Erin McGuire (Illustrator)
$7.99
Not In Store / Available To Order (allow for shipping time to bookstore or direct-to-home)

“Ursu pulls Hazel and Jack into the world of The Snow Queen in a way that makes complete emotional sense. There's something here that will resonate with anyone who has ever felt that he or she didn't belong. For voracious readers, there's extra payoff in spotting nods to everything from Alice in Wonderland to The Phantom Tollbooth to Harry Potter.”
— Shoshana Flax, Brookline Booksmith, Brookline, MA

The winner of numerous awards and recipient of four starred reviews, Anne Ursu's Breadcrumbs is a stunning and heartbreaking story of growing up, wrapped in a modern-day fairy tale.

Once upon a time, Hazel and Jack were best friends. But that was before he stopped talking to her and disappeared into a forest with a mysterious woman made of ice. Now it's up to Hazel to go in after him. Inspired by Hans Christian Andersen's "The Snow Queen," Breadcrumbs is a stunningly original fairy tale of modern-day America, a dazzling ode to the power of fantasy, and a heartbreaking meditation on how growing up is as much a choice as it is something that happens to us.

In Breadcrumbs, Anne Ursu tells, in her one-of-a-kind voice, a story that brings together fifty years of children's literature in a tale as modern as it is timeless. Hazel's journey to come to terms with her evolving friendship with Jack will deeply resonate with young readers.

Anne Ursu is the author of Breadcrumbs, which Kirkus Reviews called a "transforming testament to the power of friendship" in a starred review, and was acclaimed as one of the best books of 2011 by The Bulletin of the Center for Children's Books, School Library Journal, Publishers Weekly, Amazon.com, and the Chicago Public Library. It was also on the IndieBound Next List and was an NPR Backseat Book Club featured selection. She was also the recipient of the 2013 McKnight Fellowship Award in Children's Literature. Anne teaches at Hamline University's MFA in Writing for Children and Young Adults. She lives in Minneapolis with her son and four cats—monster fighters, all.

Erin McGuire is an illustrator of picture books and middle grade novels, including Breadcrumbs by Anne Ursu, the Nancy Drew Diaries series, and Sleeping Beauty by Cynthia Rylant. When not drawing, she enjoys reading, cooking, and camping. Erin lives in Dallas, Texas, with her husband and two cats. Visit her online at www.emcguire.net.

“Devastatingly brilliant and beautiful...Ursu has sculpted a rich and poignant adventure that brings readers deep into the mysterious, magical, and sometimes frightening forests of childhood and change. Breadcrumbs is one of those rare novels that turned me on my head then sat on my heart and refused to budge.”
— Ingrid Law, Newbery Honor-winning author of Savvy

“This is a lyrical book, a lovely book, and a smart book; it dares us to see stories as spreading more widely, and running more deeply, than we had imagined.”
— Gary Schmidt, Newbery Honor-winning author of The Wednesday Wars

Like a fairy-tale heroine, Hazel traverses the woods without a breadcrumb trail to save a boy who may not want to be saved in this multi-layered, artfully crafted, transforming testament to the power of friendship.
— Kirkus Reviews (starred review)

“Wonderfully distinct, delightfully told and destined for a long life on the shelf.”
— The Wall Street Journal