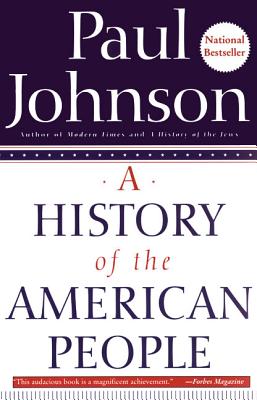 "The creation of the United States of America is the greatest of all human adventures," begins Paul Johnson. "No other national story holds such tremendous lessons, for the American people themselves and for the rest of mankind."

In his prize-winning classic, Johnson presents an in-depth portrait of American history from the first colonial settlements to the Clinton administration. This is the story of the men and women who shaped and led the nation and the ordinary people who collectively created its unique character. Littered with letters, diaries, and recorded conversations, it details the origins of their struggles for independence and nationhood, their heroic efforts and sacrifices to deal with the 'organic sin’ of slavery and the preservation of the Union to its explosive economic growth and emergence as a world power. Johnson discusses contemporary topics such as the politics of racism, education, the power of the press, political correctness, the growth of litigation, and the influence of women throughout history. He sees Americans as a problem-solving people and the story of their country as "essentially one of difficulties being overcome by intelligence and skill, by faith and strength of purpose, by courage and persistence... Looking back on its past, and forward to its future, the auguries are that it will not disappoint humanity."

Sometimes controversial and always provocative, A HISTORY OF THE AMERICAN PEOPLE is one author’s challenging and unique interpretation of American history. Johnson’s views of individuals, events, themes, and issues are original, critical, and in the end admiring, for he is, above all, a strong believer in the history and the destiny of the American people.

Paul Johnson is a historian whose work ranges over the millennia and the whole gamut of human activities. He regularly writes book reviews for several UK magazines and newspapers, such as the Literary Review and The Spectator, and he lectures around the world. He lives in London, England.