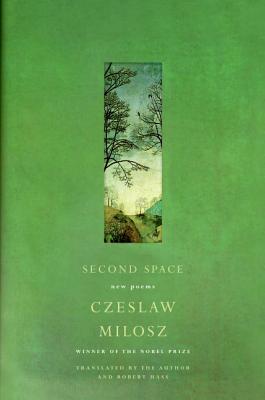 Nobel laureate Czeslaw Milosz's most recent collection Second Space marks a new stage in one of the great poetic pilgrimages of our time. Few poets have inhabited the land of old age as long or energetically as Milosz, for whom this territory holds both openings and closings, affirmations as well as losses. "Not soon, as late as the approach of my ninetieth year, / I felt a door opening in me and I entered / the clarity of early morning," he writes in "Late Ripeness." Elsewhere he laments the loss of his voracious vision -- "My wondrously quick eyes, you saw many things, / Lands and cities, islands and oceans" -- only to discover a new light that defies the limits of physical sight: "Without eyes, my gaze is fixed on one bright point, / That grows large and takes me in."

Second Space is typically capacious in the range of voices, forms, and subjects it embraces. It moves seamlessly from dramatic monologues to theological treatises, from philosophy and history to epigrams, elegies, and metaphysical meditations. It is unified by Milosz's ongoing quest to find the bond linking the things of this world with the order of a "second space," shaped not by necessity, but grace. Second Space invites us to accompany a self-proclaimed "apprentice" on this extraordinary quest. In "Treatise on Theology," Milosz calls himself "a one day's master." He is, of course, far more than this. Second Space reveals an artist peerless both in his capacity to confront the world's suffering and in his eagerness to embrace its joys: "Sun. And sky. And in the sky white clouds. / Only now everything cried to him: Eurydice! / How will I live without you, my consoling one! / But there was a fragrant scent of herbs, the low humming of bees, / And he fell asleep with his cheek on the sun-warmed earth."

Czeslaw Milosz was born in Szetejnie, Lithuania, in 1911. He worked with the Polish resistance movement in Warsaw during World War II and was later stationed in Paris and Washington, D.C., as a Polish cultural attaché. He defected to France in 1951, and in 1960 he accepted a position at the University of California, Berkeley. He was awarded the Nobel Prize in Literature in 1980, and was a member of the American Academy and Institute of Arts and Letters. He died in 2004.