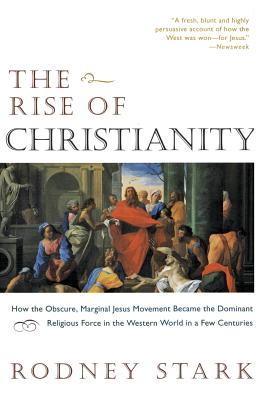 This "fresh, blunt, and highly persuasive account of how the West was won—for Jesus" (Newsweek) is now available in paperback. Stark's provocative report challenges conventional wisdom and finds that Christianity's astounding dominance of the Western world arose from its offer of a better, more secure way of life.

"Compelling reading" (Library Journal) that is sure to "generate spirited argument" (Publishers Weekly), this account of Christianity's remarkable growth within the Roman Empire is the subject of much fanfare. "Anyone who has puzzled over Christianity's rise to dominance...must read it." says Yale University's Wayne A. Meeks, for The Rise of Christianity makes a compelling case for startling conclusions. Combining his expertise in social science with historical evidence, and his insight into contemporary religion's appeal, Stark finds that early Christianity attracted the privileged rather than the poor, that most early converts were women or marginalized Jews—and ultimately "that Christianity was a success because it proved those who joined it with a more appealing, more assuring, happier, and perhaps longer life" (Andrew M. Greeley, University of Chicago).

Rodney Stark is the Distinguished Professor of the Social Sciences at Baylor University. His thirty books on the history and sociology of religion include The Rise of Christianity, Cities of God, For the Glory of God, Discovering God, and The Victory of Reason: How Christianity Led to Freedom, Capitalism, and Western Success. Stark received his Ph.D. from the University of California, Berkeley.