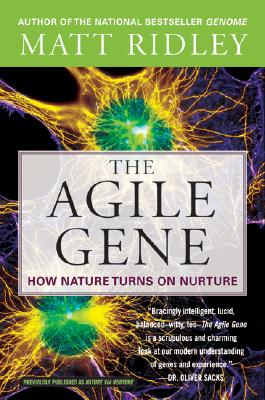 “Bracingly intelligent, lucid, balanced—witty, too. . . . A scrupulous and charming look at our modern understanding of genes and experience.” — Oliver Sacks

Armed with extraordinary new discoveries about our genes, acclaimed science writer Matt Ridley turns his attention to the nature-versus-nurture debate in a thoughtful book about the roots of human behavior.

Ridley recounts the hundred years' war between the partisans of nature and nurture to explain how this paradoxical creature, the human being, can be simultaneously free-willed and motivated by instinct and culture. With the decoding of the human genome, we now know that genes not only predetermine the broad structure of the brain, they also absorb formative experiences, react to social cues, and even run memory. They are consequences as well as causes of the will.

Matt Ridley is the author of books that have sold well over a million copies in 32 languages: THE RED QUEEN, THE ORIGINS OF VIRTUE, GENOME, NATURE VIA NURTURE, FRANCIS CRICK, THE RATIONAL OPTIMIST, THE EVOLUTION OF EVERYTHING, and HOW INNOVATION WORKS. In his bestseller GENOME and in his biography of Francis Crick, he showed an ability to translate the details of genomic discoveries into understandable and exciting stories. During the current pandemic, he has written essays for the Wall Street Journal and The Spectator about the origin and genomics of the virus. His most recent WSJ piece appeared on January 16, 2021. He is a member of the House of Lords in the UK.

“Matt Ridley breathes new life into the old debate of heredity versus environment. He deftly examines subjects as diverse as sexual identity, political theory, and psychotic behavior. This book will both edify and excite the intelligent reader.” — Jerome Groopman, M.D.

“An engrossing study of what makes us who we are … conveyed with insight and style.” — Publishers Weekly (starred review)

“I would never have expected a book about ‘nature or nurture’ to be even mildly interesting, let alone a real page-turner. But I had reckoned without Matt Ridley’s gift for surprising the reader. What a superb writer he is, and he seems to get better and better.” — Richard Dawkins, author of The Selfish Gene

“Ridley is simply one of the best science writers in the business.” — Hartford Courant

“A delight. . . a rich overview and a compellingly integrated picture of a great deal of science, both old and new." — Nature

“Ridley’s enthusiasm for his subject is contagious … He writes with panache, wit and humor and displays remarkable ingenuity in finding ways to present complicated materials for the lay reader.” — Los Angeles Times