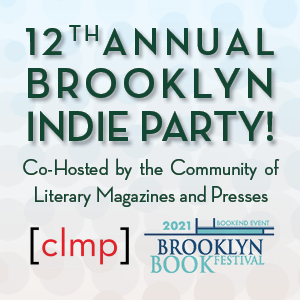 On the Friday before the Brooklyn Book Festival, Greenlight once again partners with CLMP, as well as some of Brooklyn’s best independent book and magazine publishers, to throw a (virtual) Brooklyn-sized party celebrating the spirit of literary independence in Brooklyn! Twenty local independent presses have selected their top titles of the season, and have contributed questions for an epic Brooklyn Literary Trivia contest – the champion wins a Greenlight tote bag stuffed with a copy of every title! With a soundtrack curated by Akashic Books’ Johnny Temple, drinks demo by One Story’s Hannah Tinti, and more surprises in store, this virtual event hearkens back to the unforgettable packed bookstore parties of years past, for a festive start to Brooklyn Book Festival weekend!

Featured title from No, Dear Press!

Featured title from One Story Magazine!

(Note: trivia contest winner will receive a bundle of back issues of One Story which may not include this issue.)

The Solar Grid by Ganzeer

Tolstoy Together: 85 Days of War and Peace with Yiyun Li (Hardcover)

Featured title from A Public Space!

I Am Writing You from Afar (Paperback)

What Do You Know? (Hardcover)

The Ballad of Big Feeling (Paperback)

Other Shepherds: Poems with Translations from Marina Tsvetaeva (Paperback)

The City of Good Death (Hardcover)

Featured title from The Song Cave!